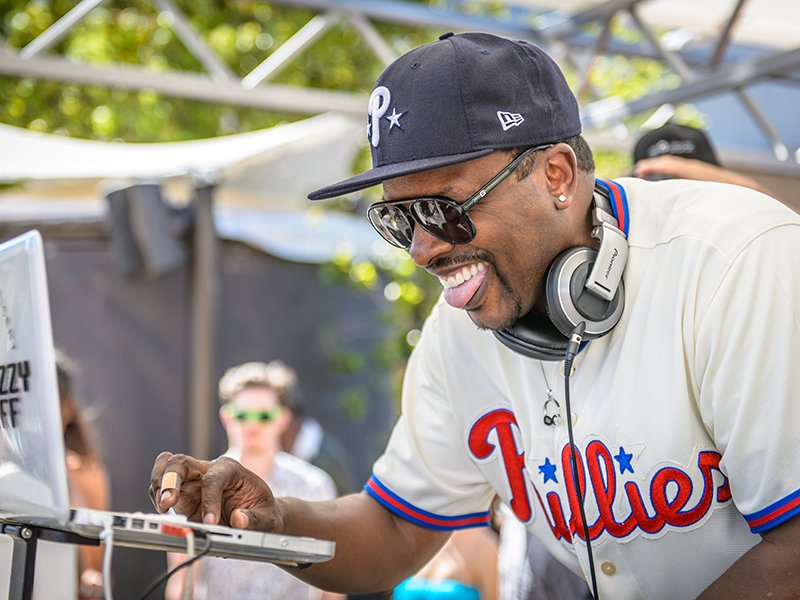 In 1990, Jeff fulfilled a longtime dream and started A Touch of Jazz, Inc. (ATOJ), a full-scale musical production facility, in his hometown of Philadelphia. Housing four complete digital and analog rooms, ATOJ also has a variety of vintage microphones, keyboards, state-of-the-art equipment and a “live” room. Pre-production, recording, and mixing are performed magically and almost effortlessly by Jeff’s constantly replenished team of talented young producers. Jeff prides himself on having created a laid-back atmosphere that allows all those who enter to feel unity, inspiration, and deliver their most personal and innovative creative work possible. The relaxed environment and the tremendous amount of great music it yielded helped solidify ATOJ’s reputation for being THE place to create original music.

Thanks to Jeff’s vision and talent, ATOJ has developed a prolific catalog of musical credits, including the theme to “The Fresh Prince of Bel Air” television show, a song on “The Simpsons” compilation album, and the theme to the UPN Network’s “Between Brothers.” ATOJ has also produced songs on the “Wild Wild West,” “Love Jones,” “The Wood,” and “In Too Deep” movie soundtracks. ATOJ has also worked with renowned artists such as Will Smith, Eminem, Michael Jackson, Jewel, Mos Def, Musiq, Kenny Lattimore, Tatyana Ali, MC Lyte, Darius Rucker (lead singer for Hootie & the Blowfish).

In addition to creating material for outside artists, ATOJ has also developed an incredible reputation for identifying and developing its own roster of talent. In summer 2000, ATOJ introduced an unknown Jill Scott to the world. Ms. Scott’s debut album “Who is Jill Scott? Words and Sound Vol. 1,” which went on to sell over two million records worldwide and earn three Grammy nominations. British duo sensation, Floetry, was another unknown group who benefited from Jeff’s and ATOJ’s magic touch, earning gold status for their debut album and rave reviews. Musiq Soulchild’s debut album, “Aijuswanaseing,” also produced by ATOJ, rounds out a stable of performers who helped to carve out the “neo-soul” sound – a movement that took the world by storm.

Ultimately Jeff Townes is a renaissance man. He’s one of the world’s foremost DJ’s, an artist who has sold millions of records, a successful TV actor, a prolific writer and producer, and the leader of an internationally renowned music production company. DJ Jazzy Jeff has spun enough records to keep the earth on its axis – not to mention dance floors spinning; wrote and recorded enough great hits as an artist to help launch entirely new art form and genre called hip hop; and produced enough acts and new music to keep the world the singing well into next generations. And he’s not even close to done. Jeff continues to build upon Philly’s longstanding reputation for developing new sounds and translating that into great music. His final legacy, however, will lie in his ability to hear, create, and deliver – in so many different ways – music that moves the world. 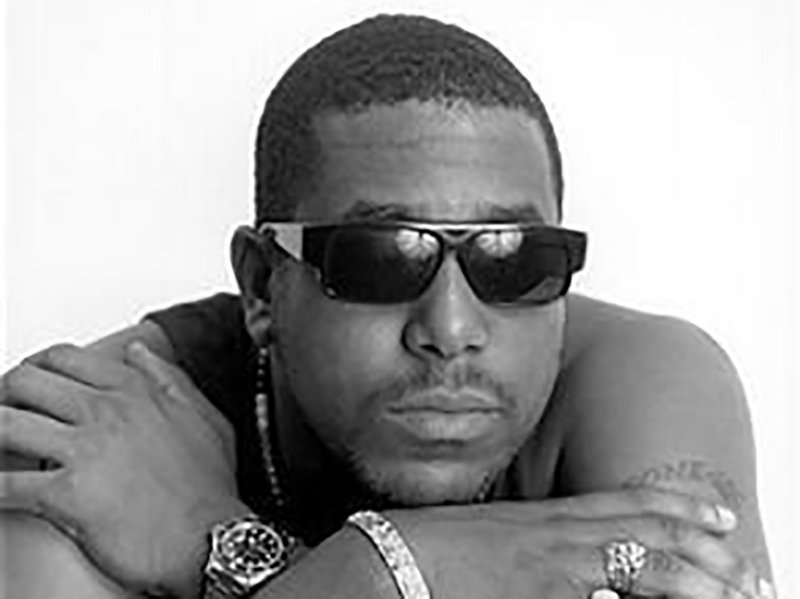 TONE LOC soared from obscurity into pop stardom in 1989 when his hoarse voice and unmistakable delivery made the song “Wild Thing” (using a sample from Van Halen’s “Jamie’s Cryin'”) a massive hit winnning Grammy’s and countless other awards. The song Wild Thing was co-written by Marvin Young, better known as Young MC, as was the second single smash, “Funky Cold Medina.” The album “Loc-ed After Dark” became the second rap release ever to top the pop charts and one of the most popular of all time.

Tone’s popularity also grew with such notable film roles in “Ace Ventura: Pet Detective,” “Heat,” “The Adventures of Ford Fairlane,” Poetic Justice,” “Posse,” “Surf Ninja’s,” “Freedom Strike,” “1998,” “Titan A.E. 2000,” “Code Hunter,” “They Crawl,” “Fakin Da Funk,” “Spy Hard,” “Blank Check,” “Car 54- Where Are You?” and many others. Tone has been fortunate to play in a variety of roles, avoiding the typecasting that most rappers and singers are constantly fighting against.

Not limiting himself to just film, he has also been in demand for TV guest spots such as hit FOX-TV series “Roc,” “Touched By An Angel,” “News Radio,” “Living Single,” “Martin,” “Early Edition” and a judge on WBN’S “You Can Be Star.” Tone has also lent his voice to several projects including the voice for “Gatorade” “Old Spice” the animation feature films “BeBe Kids,” “Ferngully,” “The Last Rainforest” and “Jamar The Bear.” Tone still has his voice on many commercials and television shows out today including the many radio spots and the cartoon commercials with Sierra Mist
and Burger King airing all of 2009, across the country.

In 2009, Tone continues to tour many festivals, colleges, clubs and corporate events across America. Because of his popularity and “clean” shows, he performs many of the top festivals across the country and recently finished a NIKE Tour which had thousands of foot race runners enjoy the shows while running.

Over the years Tone has performed with many artists such as N’Sync, Britney Spears, Destiny’s Child, Boyz II Men, Naughty By Nature, Coolio, Young MC, Sugar Hill Gang, Digital Underground, Sir Mix-A-Lot and many others. 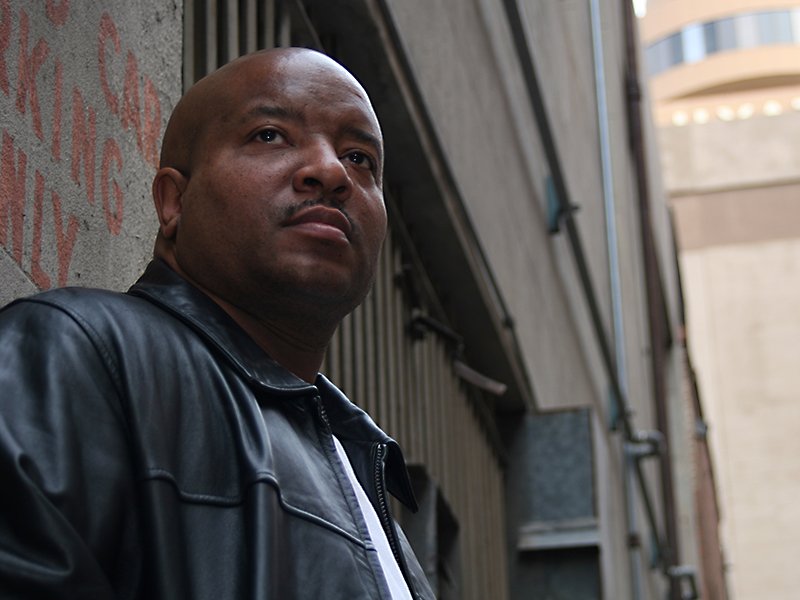 Rapper Marvin Young grew up middle-class and earned a degree in economics from USC, where he met Michael Ross and Matt Dike, co-founders of the fledgling Delicious Vinyl rap label. He made his debut as Young MC on the single “I Let ‘Em Know.” In 1989, Young collaborated with Tone-Loc on “Wild Thing,” the first Top Ten pop hit for a black rapper, and the follow-up smash “Funky Cold Medina.” Young stepped out on his own later in the year with the Top Ten smash “Bust a Move,” a good-natured examination of romantic successes and failures spiced by his sense of humor and quick-tongued rapping. The song won a Grammy for Best Rap Performance, and its strong pop appeal helped the attendant album, Stone Cold Rhymin’, go platinum. The follow-up, “Principal’s Office,” was a humorous, everyday high-school tale resembling a Chuck Berry plot, and also climbed into the Top 40.

Following Young’s success, he split acrimoniously from Delicious Vinyl, citing restrictions on his work and unwanted tinkering with his album; the label sued him for breach of contract and eventually settled out of court. Young signed with Capitol and released Brainstorm in 1991, expanding into message tracks
promoting personal responsibility. The album didn’t fare as well, and by 1993, audience tastes had shifted toward harder-edged hip-hop, rendering What’s the Flavor? a flop. In late 2000, he returned with Ain’t Going Out Like That on the indie label Young Man Moving. It didn’t make much of an impression in the rap world, but Young continued to release independent albums, including Engage the
Enzyme (2002), Adrenaline Flow (2007), and Relentless (2009), throughout the decade. In 2009, he made an appearance in the Oscar-nominated film Up in the Air. 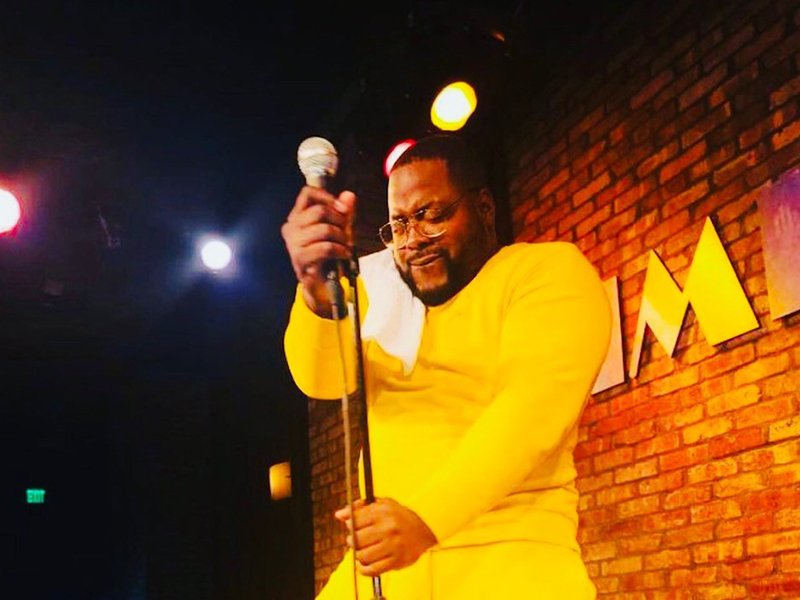 Born and raised in southwest Florida, Josh Pray quickly proved that his type of comedy was far-reaching. He has toured and made appearances in the contiguous United States, as well as Hawaii and Ireland.

Josh is a multi-faceted comedian who produces online content daily on YouTube, Facebook, Instagram, and TikTok. Viewers can watch him learn dances, perform skits with his children, react to movies and music, and share his signature “5 things”. Although he faces the challenge of producing engaging content in a saturated age, he continually rises to the occasion and continues to surprise and entertain his loyal fan base.

In addition to online and in-person comedy, Josh persists and proves that he can thrive in many different lanes through his live appearances and hosting. Appearing at Tailgates n’ Tallboys, Orlando Caribbean Festival, Jeep Beach, and many more, Josh has plans on continuing to conquer all areas of live appearances.

Simply put, Josh pray is LIVE at all times!

You can find out more information by visiting JoshPrayLive.com or visiting him on any of his social media platforms. 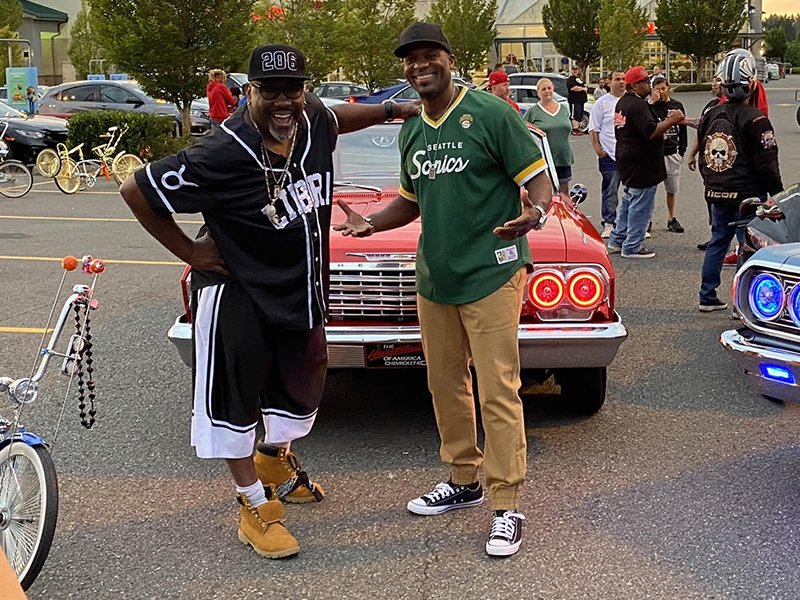 As a teenager, Kid Sensation emerged onto the hip hop scene as a group member of Grammy Award winning artist Sir Mix-a-Lot. As a solo artist, he released 9 CDs, selling over 1.5M units and counting. The new albums are fun, at times thought provoking, witty, full of life giving messages and profanity free. Over his career he has created content with/for legendary athletes, worldwide brands, charities and sports organizations. He is an a recording artist, producer, public speaker, author, and actor who serves in the community with his nonprofit Urban Harvest, and other youth based projects worldwide.

“I have a heart to spread hope, love and create meaningful dialogue through various art forms. I want to empower and inspire our youth.” – Xola

Seattle vocalist, Michael Wansley, became a household name in the summer of 2012. With every “Thrift Shop” popped tag and spent $20 bill, Wanz, as he’s now better known, solidified his place as King of the Refrain. His booming voice and indelible, flashy persona helped earn the Macklemore & Ryan Lewis track, on which he’s featured, billions of spins. Finally, his dream had come true. With roots in R&B, rock, jazz and gospel, the Billboard-topping chorus crooner, who also tutors vocal students in the Seattle-area, continues to write and record new tracks, even releasing one in honor of his late musical hero, Nate Dogg, that featured the famed west coast rapper, Warren G. And while one late-night call to a music studio changed Wanz’ life forever, it was the musician’s five decade-long dedication to song that ensured success. Look for his new single “Go Where The Love Is” on all streaming platforms April 15th, 2022. 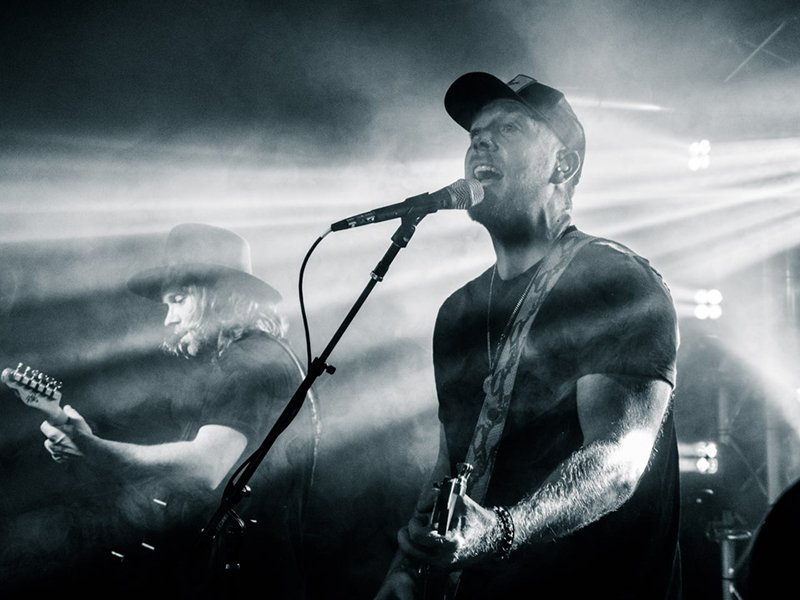 Molded by his love for Classic Country, but influenced by the Seattle Grunge scene, Aaron Crawford’s “Cascade Country” is paving the way for a new music scene in the Northwest. Approaching his career with a blue collar mentality, Crawford writes and records his way (with a little help from his friends) choosing to build a grassroots following in the oft overlooked country scene of the Great Northwest. Penning the now ubiquitous “Evergreen” a tribute to living in the Seattle area, he has logged over 1,000 gigs, and it’s apparent. His live show is just that: a show. His charisma and stage presence entice the audience to sing along, and the powerhouse Seattle radio stations championing him and his band. If you haven’t heard of him yet, you will. His drive, enthusiasm, and desire to succeed, will most certainly make him a mainstay of the die hard country music scene.
Close 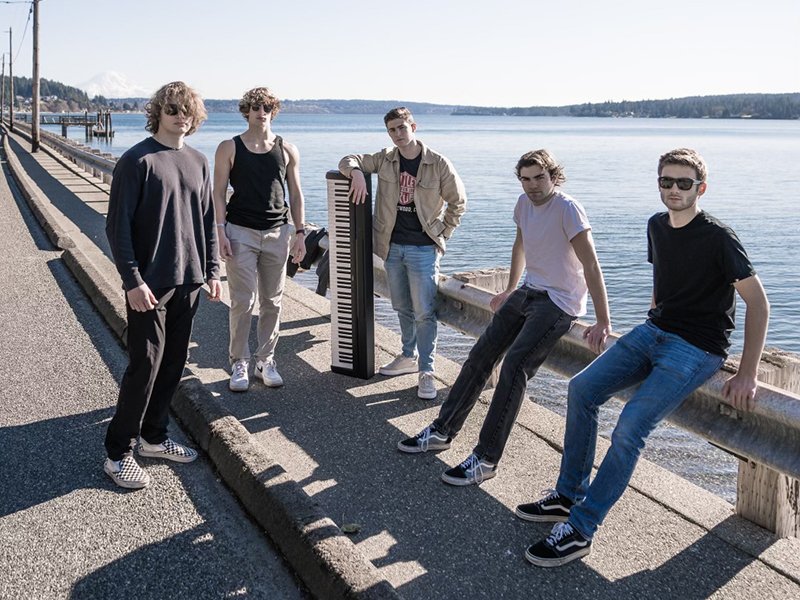 Stealing their name from a road on the coast, Cromwell is a rock band based in Gig Harbor. Starting off as mostly new musicians in the summer of ‘19, five high school students stumbled their way into the lead singer’s attic to learn “1979” by the Smashing Pumpkins. Since then, they’ve played dozens of shows around the seattle area, built up a small but loyal following, and released two singles on all music platforms. They’ve tried (and failed) many times to put a label on their genre. They’re mostly a rock band, but at this point, they just like to play good music.
Close